Let’s face it, pinning can sometimes be a real drag… especially when it comes to the laborious task of pinning each of your online store products to try and promote them and help bring in a little extra cash.  Wouldn’t it be nice if you could promote your entire eBay and/or Etsy stores on Pinterest with just a few clicks?  Well that time has come!  With Pin4Ever’s new Promote Products tool, you can easily pin all of your product listings from multiple stores, including eBay and Etsy, with more stores on the way.

You begin by creating some new boards on Pinterest or just use existing ones.  Then click on the

Promote Products button on the far right of the Pin4Ever toolbar.  Then enter your

store name into the store name box.  Then select the Target Board for where you want these listings to be promoted.  At this point, you can just click the

Add Listings button, and all of your store listings will load into the list: 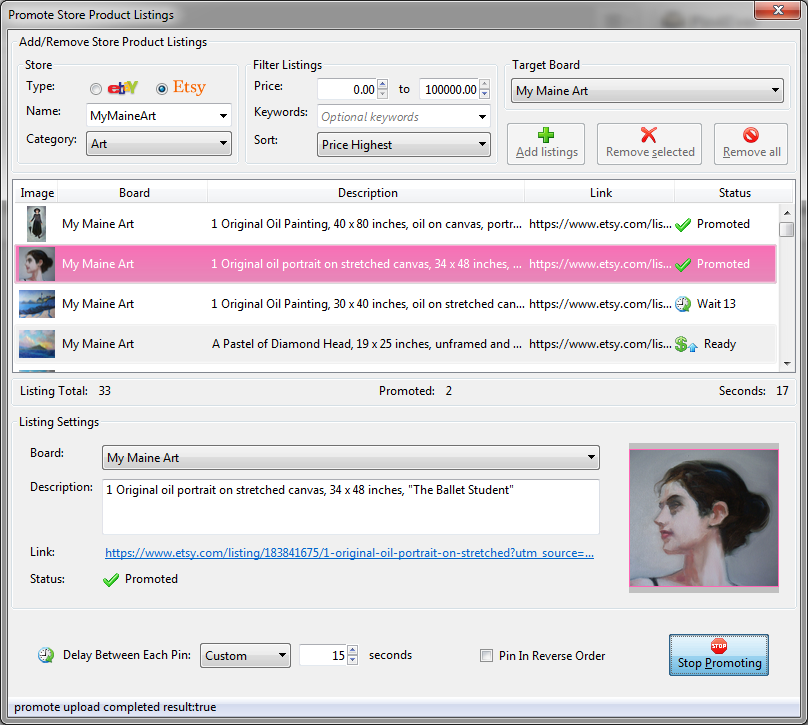 You can filter the listings that are added by category, price range, and keywords, and add them in a particular sort order, such as by price or by creation date.  If too many listings are coming in, just press the

You also can select individual listings and edit their target board and/or tweak their descriptions.  You can also click on their links to see the actual listing of the item.

Then you can set a delay.  15 seconds is the recommended delay so you don’t get banned for pinning too fast, although you can pin with zero seconds delay if your are pinning less than 300 pins per hour per IP address (this pin rate may change in the future based on what Pinterest allows).  One final setting, you can also check the Pin In Reverse Order checkbox, which will pin from the bottom of your list to the top, so that the pins on Pinterest will wind up the the same order as your list shows.

Once everything looks right, press the

Promote Listings button on the lower right, to begin pinning your listings. You can stop the listings at any time.  If in the remote chance an error occurs while pinning, a

will appear in the status column of that listing, and pinning will proceed to the next pin in the list.  You can click on the listing in question, to see more details about the error.

A video demo/tutorial is here to show the entire process:

You can get a free trial of Pin4Ever’s backups and several Pinterest tools for one week. After the free trial, you will automatically continue with Pin4Ever’s Free Plan, which gives you access to a number of helpful free tools, including Pin Anything, Bulk Editing (Move, Copy, Delete, and Rearrange), and now the new Pin Ratings tool. 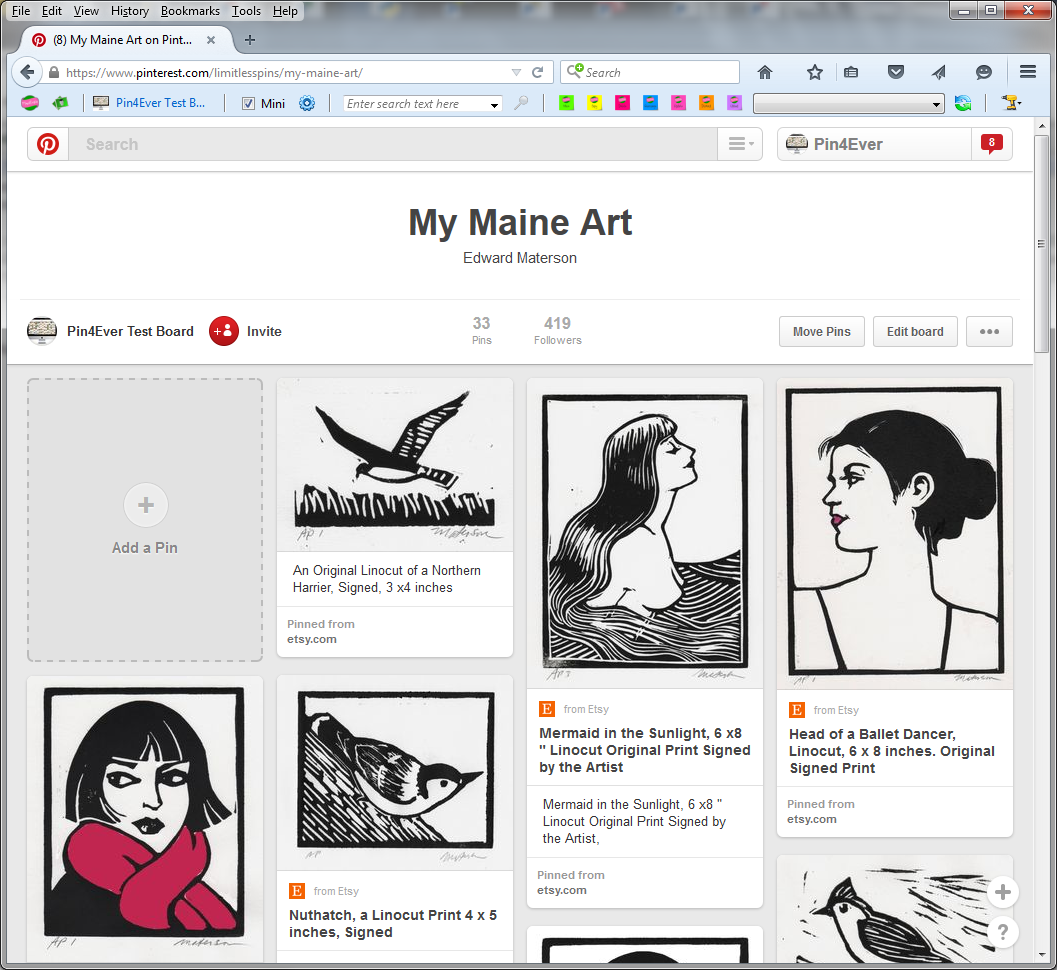 At Pin4Ever, we’re always trying to improve the pinning experience. Please let us know if you have any feedback about which of our tools you like best, or suggestions for new tools you’d like to see.

Pin4Ever is a set of power tools for Pinterest that help you quickly protect, organize, create, and upload your pins. Pin4Ever is updated frequently to keep up with the latest changes that Pinterest.com

When pinning multiple pins or following multiple pinners with Pin4Ever’s power tools,  you may encounter the dreaded Pinterest “slow down” message, and be blocked.  This means that you exceeded the Pinterest.com speed limit, and you will probably have to wait at least an hour before you try again, and then go even slower.  If you exceed the speed limit again, you may get blocked for 24 hours, or more.

For using Pin4Ever’s Power Follow Tool, as of the date of this article, for established Pinterest accounts, Power Follow will currently do 300 follows within an hour (this will take approximately under 2 minutes on a high-speed internet connection); however,  301 follows in this same time period, will get you blocked for an hour.  Or you can follow 240 per hour, steady, non-stop around the clock, which is about a 15 second delay, and not get blocked. 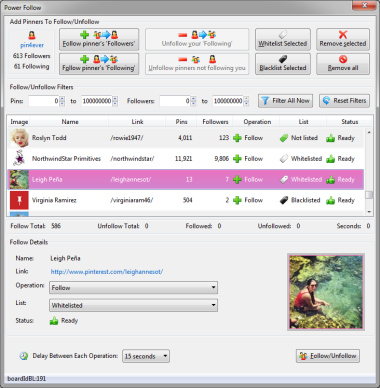 When using other Pin4Ever tools that pin pins, such as Bulk Image Upload and Restore From Backup, we have yet to experiment with the pinning rates, but they are probably along the same lines.  These rates are currently tied to your IP address, not to your account or your computer.  What this means is that only so many pins and follows per house in a certain amount of time.   Also, when you start a new account, those speed limits are much lower! 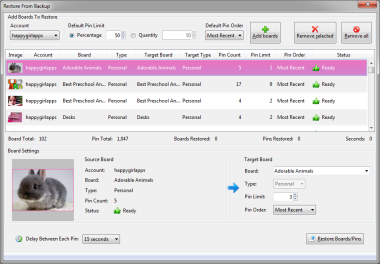 Running a backup of your pins with Pin4Ever’s Backup tool usually runs much faster, at about 500 pins per minute, depending on your physical connection speed to Pinterest, and whether or not you are pinning during a high traffic time.  This tool is free to try for the first week, and you can view and keep your backups forever, without spending a dime.

Please feel free to try Pin4Ever to test out the rates, and comment below on what you find out, and we will add your insights to this article.  Keep in mind, that Pinterest seems to change things on a daily basis, as they reportedly have about 70 engineers on the payroll that need something to do, so these rates could be changing as I type!

Some tests restoring pins to Pinterest using the Pin4Ever Restore From Backup feature reveal that about 88 continuous pins can be restored with  no delay in between pins.  After waiting a few minutes, anther 17 pins were able to be uploaded.  Then setting the delay to 15 seconds between each pin, the speed limit was not exceeded until 74 pins were updated.  So the pinning speed limit seems to be about a third to a fourth of the following speed limit.

At the request of one of our best customers, I did another power follow test and was able to continuously follow an unlimited amount of users without Pinterest blocking me, when the delay was set at 15 seconds between follows.  Remember, this following rate is per IP Address, so if you have multiple accounts and/or multiple computers in your house, they usually all share the same dynamic IP address assigned by your internet provider, and you only get so many follows per IP per hour (around 240).